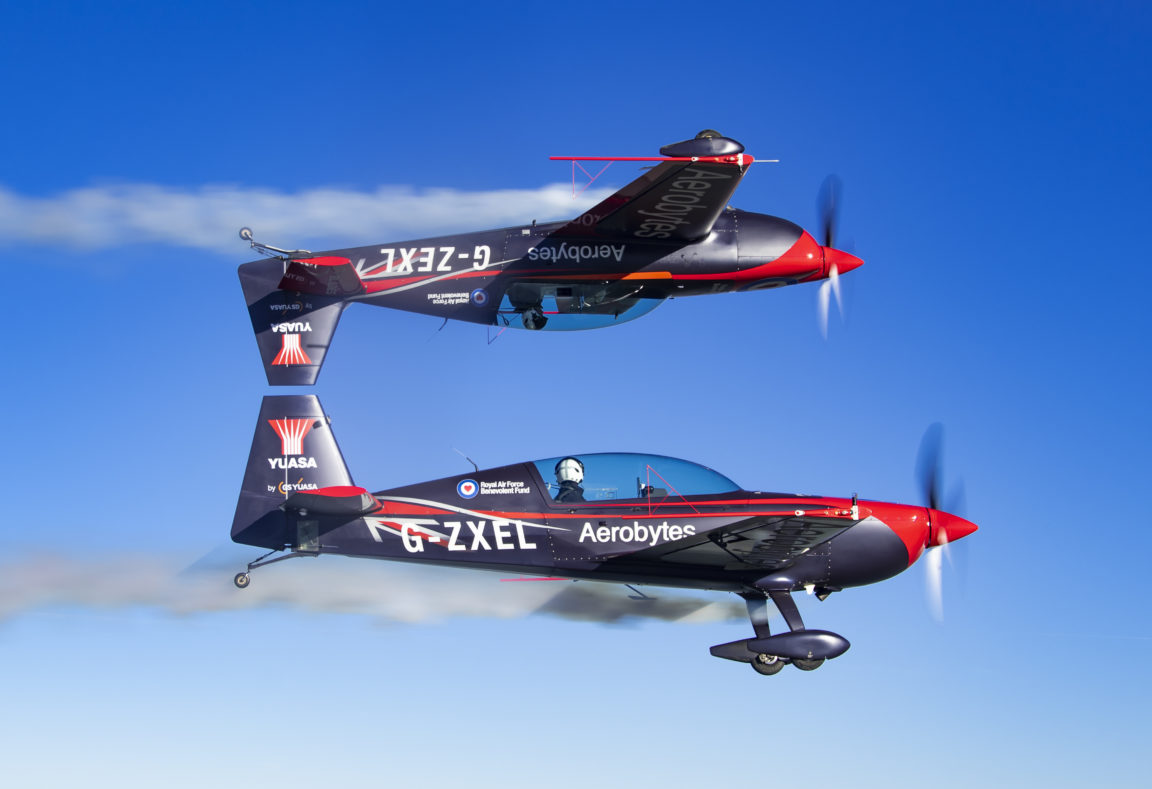 Yuasa, a brand of global battery manufacturer GS Yuasa, are taking their sponsorship programme to new heights by teaming up with world famous air display team The Blades. The partnership will see Yuasa logos feature prominently on the team’s four aircraft as they perform exhilarating close-formation aerobatic displays to well over four million people at events in 2022.

Flown by a team of former top Red Arrows pilots, The Blades’ award-winning displays feature over 30 high G manoeuvres, some of which involve flying as close as four feet apart. They are firm favourites at major events including the likes of The Bournemouth Air Festival, Goodwood Festival of Speed and The Royal International Air Tattoo.

As well as these spectacular appearances, The Blades are the world’s only aerobatic airline… which means they fly passengers in formation and through a host of aerobatic moves. They also regularly feature on television programmes and in media articles flying journalists, presenters and other a whole host of A-list celebrities that have included Ant and Dec, James Corden and Mark Webber.

Since launching in 2006 the team have been watched by over 60 million spectators and flown over 3,500 passengers. They are also the reigning World Formation Aerobatic Champions.

Yuasa are the UK’s leading brand of vehicle and industrial batteries, which are used by millions of people to power everything from trips to the shops to missions in outer space. Their new partnership with The Blades will take the company’s brand awareness to new levels by engaging families and enthusiasts at air shows, which are regularly hailed as the largest spectator attended events in the country behind only football.

James Douglas, European Group Marketing Manager of GS Yuasa Battery Europe Ltd, said: “We are delighted to announce our sponsorship of The Blades. We believe our solid partnership will be a winning one. With former Red Arrows at the controls, precision flying, and a busy schedule of display and experience flying, the team very much share, and demonstrate, our own core values of quality, reliability, performance, and teamwork in everything they do. (or continuous improvement, teamwork, putting the customer first and recognising people)

“This fantastic new partnership really does take our sponsorship programme to an exciting new level, with the team’s breath-taking close formation aerobatic displays being watched by millions of people every year. We will be working closely with the team on many exciting events and projects throughout 2022 so the sky’s the limit!”

Ben Murphy, Head of The Blades added: “We are excited to head into the 2022 season with GS Yuasa; two forward thinking teams that share the same values of quality, continuous improvement, and teamwork.

We also share a great passion for motorsport and seeing what can be achieved when man and machine strive for perfection and top-level performance; we just do it in the air rather than on the ground! There are so many crossovers between us, and we look forward to this partnership going from strength to strength.”

For exclusive content and to keep up to date with all of the action search GSYuasaUK on Social Media or visit www.yuasa.com