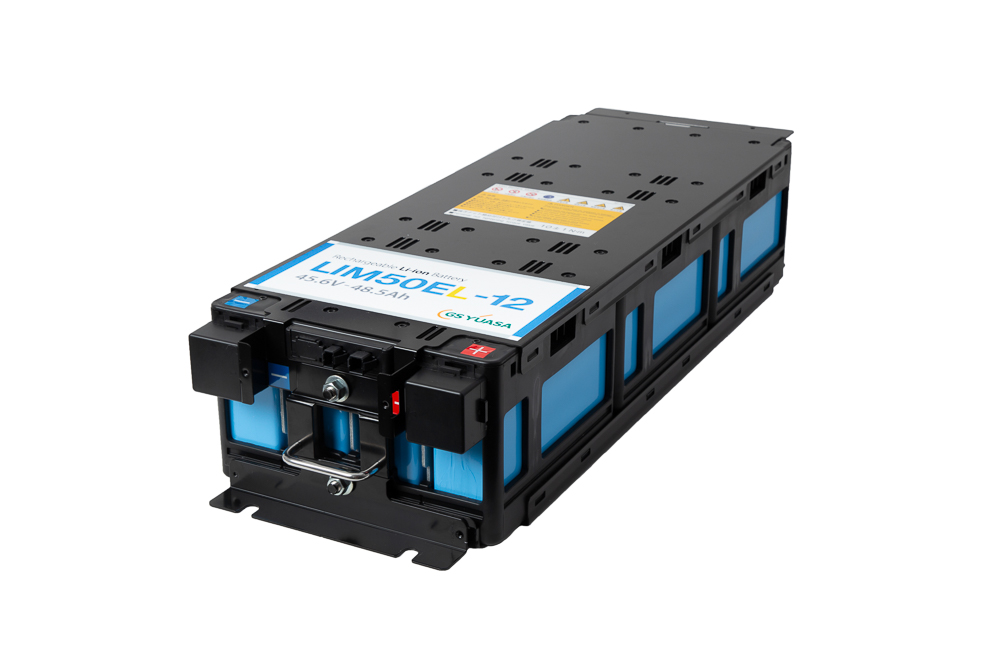 The industrial lithium-ion battery modules of the LIM50EL series from GS YUASA enable use over long periods of time in applications with frequent charge/discharge cycles as well as in environments with relatively high temperatures. They thus offer a safe energy storage solution for ESS, solar & wind, UPS, frequency market, mobility and many more applications.

Their cyclic lifetime is 11,000 charge/discharge cycles (at DOD 100%). The lifetime at float charge is 15 years, after which the batteries still have a residual capacity of at least 90%. They have a nominal capacity of 48.5Ah (0.2C), a maximum charge current of 125A (2.5C) and discharge current of 300A (6C). The operating temperature range is -20 to +45°C. In addition, the LIM50EL modules are equipped with external communication functions compatible with monitoring systems for GS YUASA storage batteries.

Due to their reliability and robustness, the LIM50EL lithium-ion battery modules qualify for a wide range of applications. Among other things, the LIM50EL-12 modules were installed in the Butler S 50/25 battery storage system, an environmentally friendly plug-and-play solution developed by Axpo for the rapid provision of electricity indoors and outdoors, for example on construction sites. The mobile battery storage (emost, electrical mobile storage) guarantees a flexible power supply without a grid connection and offers a better price/performance ratio in terms of life cycle costs than diesel generators or time-limited grid connections0.

In addition, it allows ecological use without exhaust fumes even in closed rooms and does not cause any noise emissions or air pollution. Currently, the Butler S is available with a nominal power of 50 kVA and a nominal capacity of 25 kWh. The system is charged via a conventional 400VAC CEE socket. The IoT platform specially developed for monitoring enables remote retrieval of all important operating parameters as well as their storage and subsequent evaluation. GS YUASA supported Axpo with its expertise throughout the entire conception and test phase of the battery storage system.

To stay up to date with Yuasa’s products and latest news, visit: www.yuasasverige.se
GS YUASA is one of the largest manufacturers and suppliers of rechargeable batteries with production facilities worldwide and an extensive marketing and distribution network in Europe. The wide range of lead-acid and lithium-ion batteries covers most well-known industrial applications, such as security and alarm systems, UPS and emergency lighting systems as well as OEM equipment. The three business units include Industrial (industrial batteries for standby and cyclic applications), Automotive and Motorcycle (automotive and motorbike starter batteries).
Hitta
distributör
Hitta rätt
batteri